Today was technically the last day of orientation and we spent most of the morning at the US Embassy. To be frank, the exterior of the US Embassy looks a bit like a prison. Because the security at the embassy was getting antsy at the 19 random Fulbrighters dawdling on their doorstep, I didn’t get a chance to snap a picture so the below is borrowed from Google. 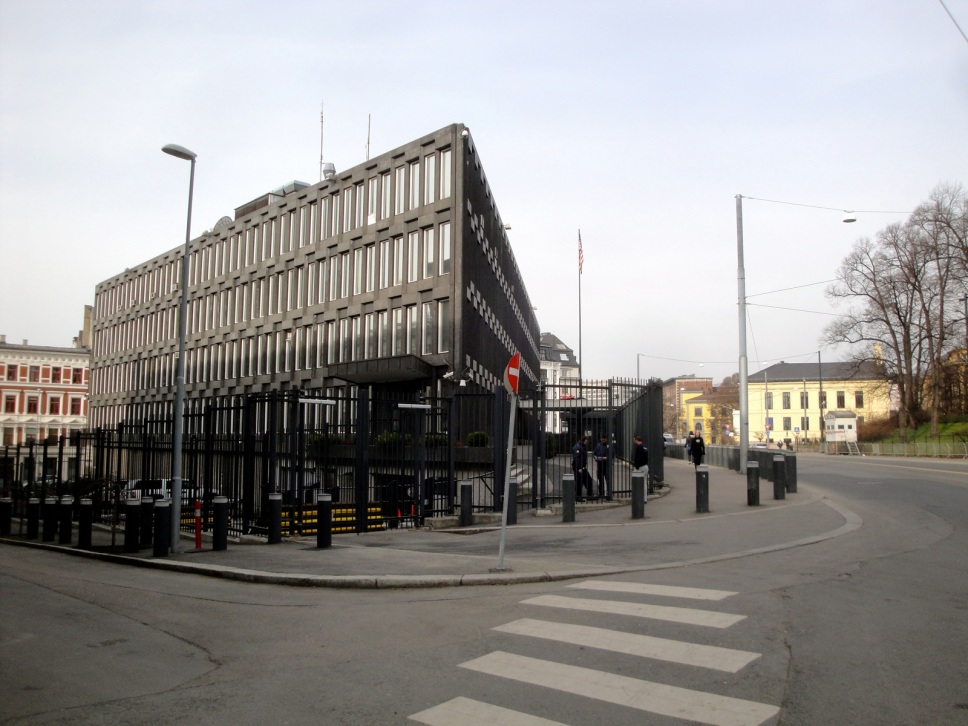 A bit ugly, right? We spent most of our time there going over practical tips for living in Norway and reviewing the rest of the red tape that we still have to wade through. On the bright side, I was the only Fulbrighter to have gotten their residence card so I felt a bit ahead of the game!

Because the orientation ended after lunch, most of the Fulbrighters still had a lot of time to explore the city. We decided to walk to Vigeland Park, which is the world’s largest sculpture park made by a single artist. It took Vigeland 20 years to make and there are 212 sculptures in the park depicting the “Human Condition.” The park provided a stunning view of the city and some of the sculptures were simply incredible while others were more disturbing. It was by far one of my favorite sights in Oslo and well worth the visit. 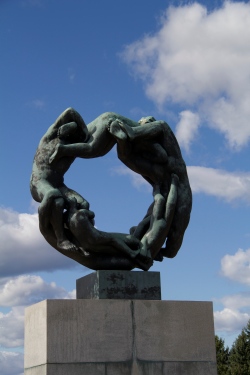 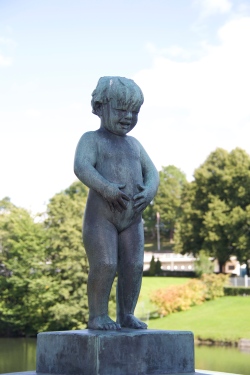 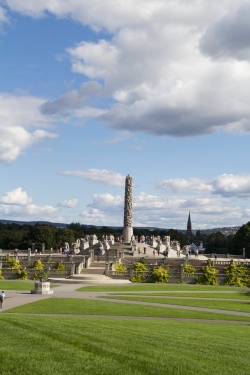 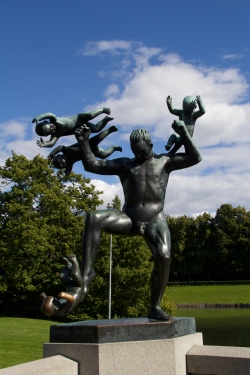 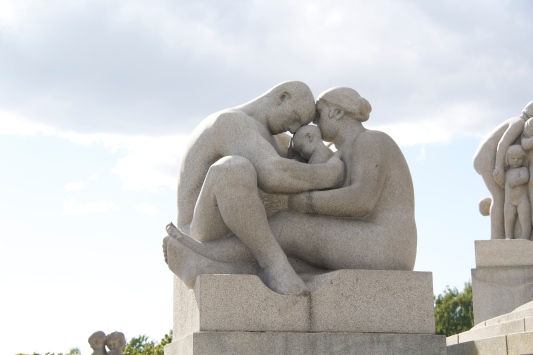 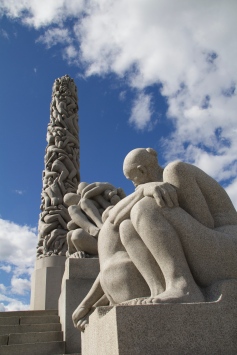 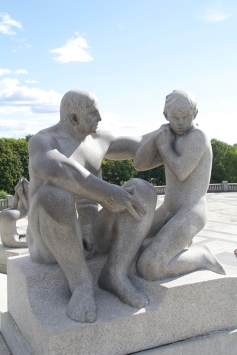 After our wander through the park many of the Fulbrighters had to run to catch their flights. Lucky for me, all of the teachers (the ETAs and Roving Scholars) got an extra day of orientation so that we could get a thorough overview of the Norwegian education system. Since I had an extra night in Oslo I as well as Bergen ETA, Abby, decided to get tickets to the Oslo Opera House. Now I know that I mentioned that I have never been a particularly big fan of opera, however opera is something that I have always felt I could give a second, third, and even forth chance. Abby and her family are actually huge opera buffs so she was able to walk me through some of the finer points of opera before we went. What ended up being her most important tip was reading the plot of the opera beforehand. We had tickets to watch Madame Butterfly and she was able to give me a dramatic reading from the Met Opera’s plot synopsis earlier in the day. I decided not to write my own synopsis because this post is already fairly lengthy, but I recommend the link to the Met Opera’s synopsis and as a warning there are *spoilers* ahead as well as a few of my own thoughts on the opera.

Now I admit I was skeptical of how much I was going to like the opera, especially after hearing the plot. Boy was I wrong. I can’t wait to go back. First of all the set was incredible. The set designers really did a great job of utilizing the space on stage and even helped to nuance the plot with it. My favorite part was in the second act where the floorboards of the house are torn up revealing the supporting stones underneath. This gave the set the appearance of either being surrounded by a graveyard or a bombed city (appropriate considering that the opera ends in a suicide and is set in Nagasaki).

I was also surprised at how the Oslo Opera complicated the plot. The Met’s plot synopsis as well as Abby’s previous experiences with Madame Butterfly all cast Pinkerton as a pig and Madame Butterfly as a naive girl. The actual libretto reveals that Madame Butterfly is not as guileless as you would think. She tells Pinkerton of her initial disgust towards him because he is a “savage” and she still expresses some resistance to him on her wedding day. On her wedding night she reproaches Pinkerton by saying that she has heard how in America butterflies are killed and pinned to boards as prizes, yet Pinkerton insists that butterflies are not pinned out of cruelty, but to cherish them and keep them close. Obviously Butterfly’s interpretation is more accurate and despair raises its ugly head in the second act.

Pinkerton also appears much more remorseful in this interpretation of Madame Butterfly. According to Abby, the most noticeable change to the plot came with Madame Butterfly’s suicide. During the entire second act there was a seemingly random character on stage. Abby and I initially thought that it was supposed to represent perhaps a wiser version of Pinkerton or a personification of his guilt. This was true, but with a twist. The man who had been following the entire second act was the adult son of Pinkerton and Madame Butterfly, something that Butterfly reveals before her death. Her son is the witness to Pinkerton’s guilt, his abandonment of Butterfly, and his contribution to her suicide. He embodies the guilt that Pinkerton feels towards Butterfly because he stands as both an accuser and witness to his father’s crimes.

The theme of destruction on the part of the Americans also runs wild throughout the opera and in my opinion was done quite well. American consumerism can be seen in the way that people dress, but also in how Pinkerton objectifies Butterfly. He says that he is marrying her because she is beautiful and happens to come cheap (she costs him 100 yen) while also admitting that he plans to upgrade to an American wife once he finds a suitable one. Some other striking scenes include when Butterfly’s family disowns her and throws an American flag on her wedding bed, highlighting how she is quite literally sleeping with the enemy, and when Butterfly’s son is blindfolded and draped in an American flag. When her son then begins to play with a toy plane the kamikaze imagery becomes quite stark.

Then there was the singing. In all of the other occasions that I have gone to the opera I have never really appreciated the singing, mostly because I can’t understand what people are singing (yes, even when they are singing in English). The singing was absolutely superb and I could have cared less that the opera was in Italian. I got goosebumps galore and I admit that I was teary eyed by the time Madame Butterfly committed suicide. He Hui, the singer who played Butterfly got a standing ovation, and I found out afterwards that she is well known worldwide for her interpretation of Butterfly.

To make the night even better, Abby and I bumped into another Fulbrighter who we had encouraged to join us at the Opera. We all ended the night going out for cakes and hot chocolate and vowing to return to the Oslo Opera during our year here. Overall, it was a really fabulous day. 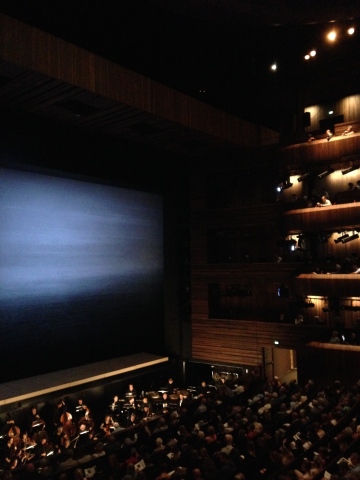 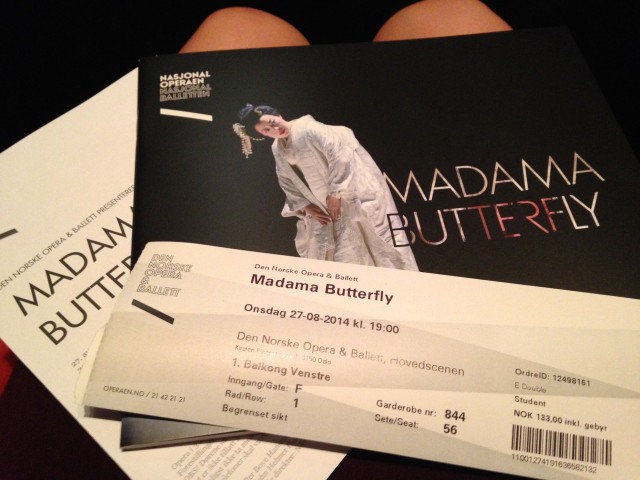