Even though I was pretty travel weary when I arrived in Rome, I still managed to really enjoy the city. Here are my tips and tricks:

Sunday was my last full day in Rome, and because I was a bit travel weary I decided to take it pretty slow. My initial plan was to spend the majority of the day across the Tiber River. I had yet to visit the Vatican or Castel Sant’Angelo so I was planning on visiting both sights that day. Plus, it seemed appropriate to be going to the Vatican on Sunday.

Unfortunately, I got a bit of a late start in the morning, so by the time I walked across the river, had lunch, and arrived at Castel Sant’Angelo it was early afternoon. I had read online that the castle closes at 2 pm on Sundays, and when I took a look at the line it was pretty clear that by the time I managed to get inside the castle would be closing. So instead of getting in line, I snapped a few pictures before heading off to the Vatican. 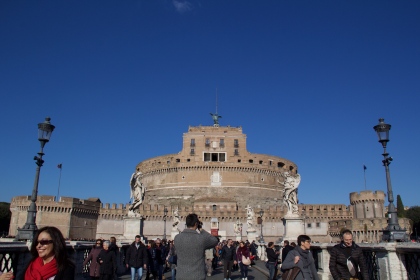 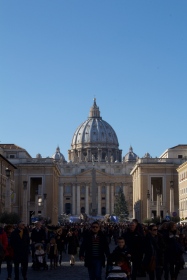 Iman was feeling better today so she met me at the Vatican. Now remember how I said I didn’t book any tours? This still holds true for the Vatican, though it’s the closest that I got to taking a tour in Rome. I’ve had a ton of friends give really good reviews of Rick Steves’s Walking Tours so I decided to test one out while I waited in line for Iman. I didn’t get far in the audioguide, but what I heard was pretty good. Here’s a bit of what I learned: St. Peter’s Basilica was built on the site where St. Peter was crucified and buried, and the current church was created in two stages. The old church was left intact while St. Peter’s was built around it. Once the newer building was complete, the old church was knocked down and moved out. The columns in front of the Basilica are built in a circular shape since they are supposed to represent the welcoming arms of the church. Basically it’s supposed to be a big hug. The statues that adorn the columns are ten feet tall and each represents a different saint. Originally it used to be quite difficult to see the dome since when you approach the church the facade hides the dome (see below). It wasn’t until Mussolini closed off the street leading up to the Vatican that people were able to get a good view of the entire structure. 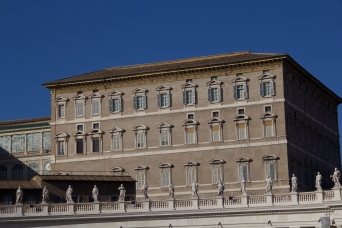 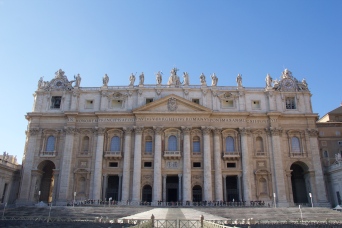 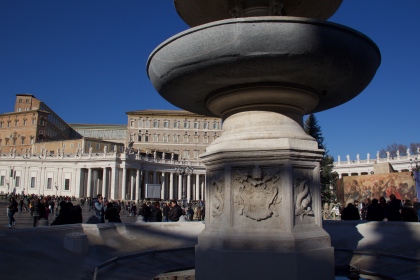 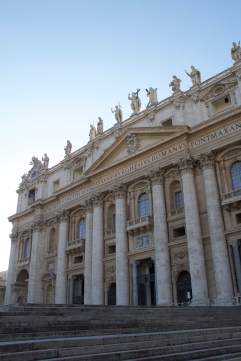 Although the line to the Vatican was long, I have to give them credit and say that it did move pretty quickly. Without too much ado, Iman and I were let inside the church after about thirty minutes. It was well worth the wait. It was stunning. 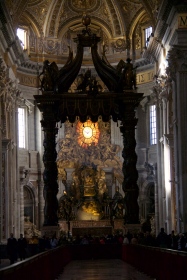 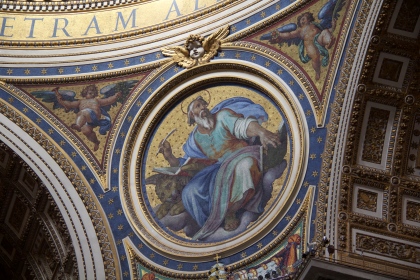 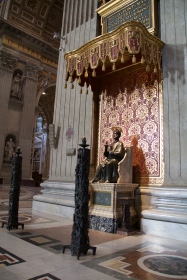 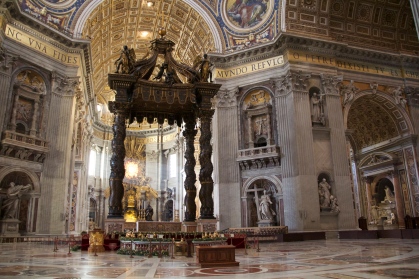 After we walked around the church, we took stairs down to the catacombs and saw what we think was the grave of St. Peter. We’re still not entirely sure since talking was not encouraged in the catacombs and all of the signs were in Italian. The grave of Pope John Paul II was towards the exit and we paid our respects before leaving.

After that all that was really left for us to do was to climb to the top of the dome. Now there are two options for the ascent. You can either climb the whole way to the top (around 550 stairs) or take an elevator up about halfway and then take the remaining set of stairs (around 350 stairs). Considering that Stephansdom in Vienna was around 340 stairs and I found that to be plenty, I was happy to pay the extra two euros and pass the first 200 or so stairs on the elevator. After a bit of a wait, we caught the elevator and were whisked up to the base of the dome. From there you could get a really good view of the dome’s artwork before continuing up to the top. 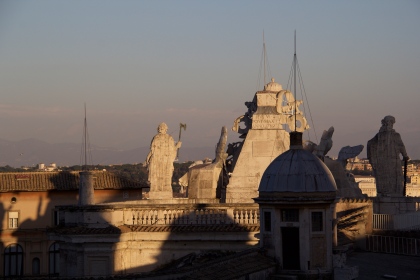 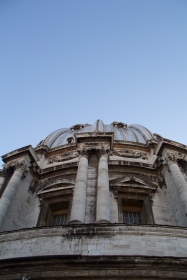 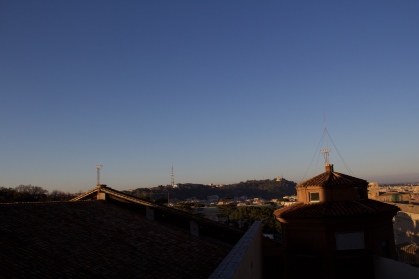 There were two things that surprised me on our way to the top. First the complete lack of handrails. When I mentioned this to Iman she just laughed and said something along the lines of “Welcome to Italy.” The second thing that surprised me was that the stairwell actually curves to match the curve of the dome. This means that you couldn’t stand up straight as your approached the top of the dome, otherwise you would risk hitting your head on the curved ceiling. But soon enough we were at the top. The views were great and were enhanced due to the fading daylight. We had inadvertently timed our ascent with sunset. 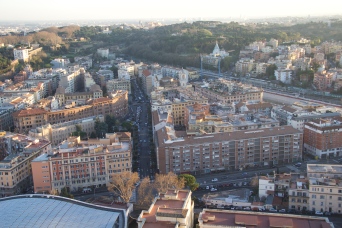 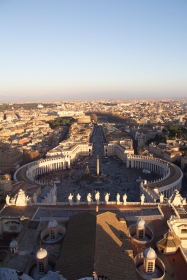 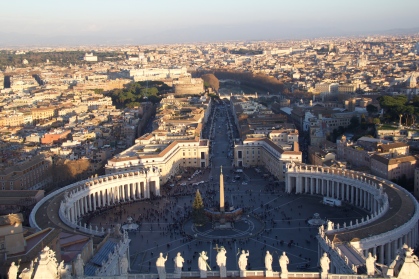 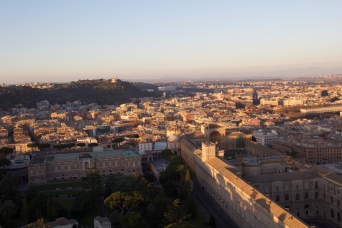 Once we were done we began the descent back to street level.

I did have to laugh at the public toilets at the Vatican. Based on their signs it’s clear that the male dominated church has only recently had to include female restrooms. 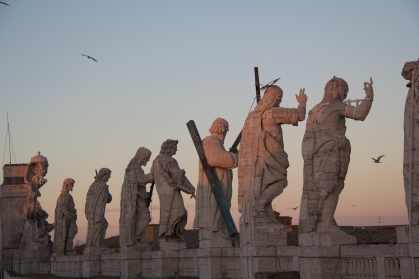 Now one of the great things about Sundays in Rome is that apparently sights that are run by the city (usually things like museums) are free. My original plan was to go to the Capitoline Museums, but cold symptoms made me decide to cut my day short. Overall I had a great day though. I don’t happen to be religious, and going to a Lutheran school from a young age means that I am definitely not Catholic, but it was it was really nice to go to such a holy place. Even though I don’t share the beliefs of many of the visitors, it was still very touching to see how much St. Peter’s meant to them.

One thing that I noticed in Rome is how some of the simplest things make me happy. It was sunny and warm almost the entire time I was in Rome, and that just made every day seem amazing. Even just waking up to the sunshine made me ridiculously happy.

Anyways, I picked up Gargi in the morning and we walked to Santa Maria Maggiore, which is one of the churches in Rome that is actually owned by the Vatican. Apparently this gives the property something akin to diplomatic status. Because I was with Gargi hiring a guide or going on a tour wasn’t particularly necessary. Between Gargi’s knowledge and Wikipedia we managed to do alright. We even managed to find Bernini’s nondescript grave. 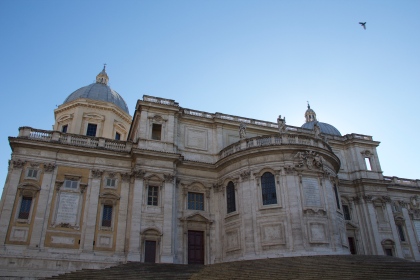 It was pretty incredible once we were inside the Roman Forum. While everything is more or less ruins, you still get a pretty good sense of the scale and craftsmanship that must have gone into everything. 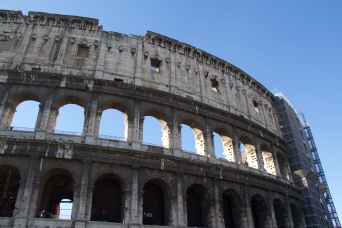 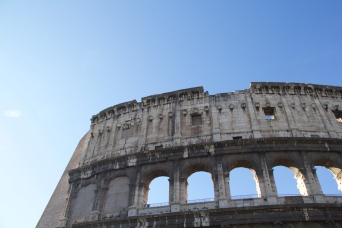 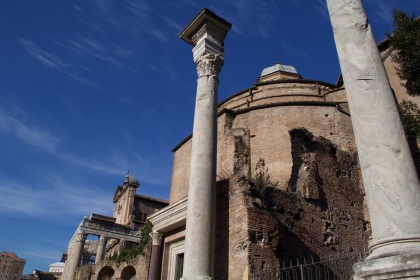 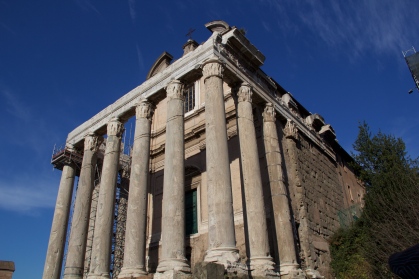 My favorite thing that Gargi told me about the Roman Forum was that if you look at some of the inscriptions you can tell that things have been replaced or chiseled over. She told me that this was because new battles, generals, and victories would be recorded on these monuments and the old ones would be erased. I guess you really had to be quite the military stud to have your name stay on these memorials.

Once we were done walking around the Forum we retraced our steps to the Colosseum. One thing that really surprised me was the size of the Colosseum’s steps. Now I’ll willingly admit that I’m a short person at 5’3” (160 cm), but I like to think that I would have been tall in ancient Rome. So I was really surprised at how steep the steps were. Gargi also told me that these steps are called a vomitorium. The idea behind them is that the stairwell slope downwards and causes you to rush down the stairs. So the Colosseum was designed to “vomit” its crowds out quickly and efficiently.

And now for a few more Colosseum facts. Fact one: you might notice a number of holes in Colosseum when you take a look at my pictures. This is because the Colosseum used to have a marble facade. The marble was taken and used in other constructions, one of the most notable being St. Peter’s Basilica. Fact two: historians suspect that the Colosseum used to have some sort of shade system, which considering that I was feeling pretty warm in the middle of winter seems like quite a good idea. Fact three: apparently ladies had to sit towards the top of the Colosseum since it was thought that the violence would be too upsetting for them to view up close. 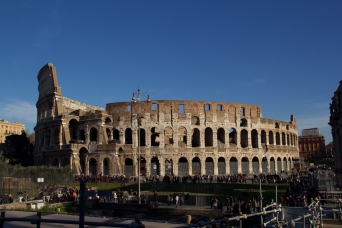 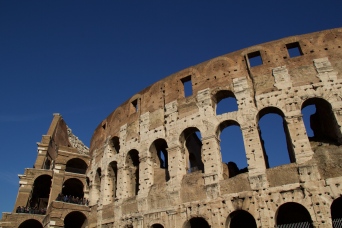 Now by the time Gargi and I had finished with the Colosseum we were starving. So we sat down for lunch and waited for Iman to join us. Once our hunger had been satiated we walked towards the Pantheon since I wanted to actually go inside.

We took a small detour just before the Pantheon since a few blocks away lies the church Santa Maria Sopra Minerva. Right outside the church is an obelisk by Bernini and inside there is a statue of Jesus Christ done by Michelangelo. I wouldn’t have said that the statue was particularly striking, but the church was quite beautiful. 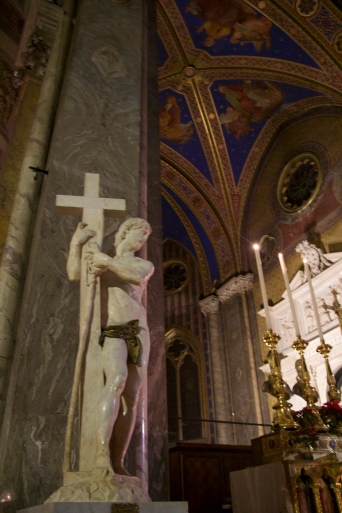 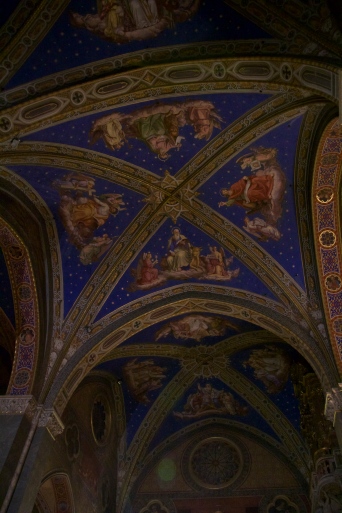 When we were done looking around we quietly left the church and continued on to the Pantheon. Gargi had told me early on that it was her favorite building in Rome and I would have to agree. There isn’t too much to do inside but that doesn’t stop it from being incredible. 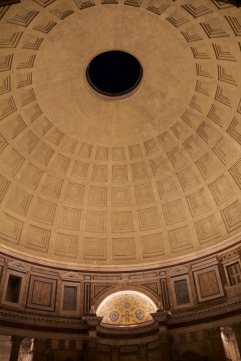 After that it was gelato time! Now that I’m an adult I can do things like have dessert before dinner and that’s basically what happened. After we grabbed gelato we walked back towards Piazza Navona and paid Borromini’s Sant’Agnese a short visit. After we were done we stopped by a drug store for Iman (take note that Italian pharmacies do not tend to sell American drugs) and then found an Argentinian restaurant for dinner. Now both Iman and Gargi have been living in Italy since October so I couldn’t blame them for wanting to eat literally anything other than Italian food. The restaurant, Baires, actually ended up being really good and I would highly recommend their sangria if you get a chance to go.

Once we had finished we slowly walked back towards our hostels. It was here that Gargi and I parted ways since she was going back to Messina the next day. Overall I had a great day and can’t thank Gargi enough for showing me around.