I really loved Madrid. It wasn’t that touristy when I was there and it has a great relaxed atmosphere with a ton of culture. As always, here are my tips for Madrid:

Even though I was pretty travel weary when I arrived in Rome, I still managed to really enjoy the city. Here are my tips and tricks:

So I didn’t bother writing about the 30th since we spent the day going back home to the UK from Salzburg. How did we do that you might ask. By train. I’m currently very happy not to be taking a train anytime in the near future. Though to be somewhat fair this time it took less than 26 hours.

Anyways, on to New Year’s Eve. As much as I enjoy traveling with my Dad and spending time with him, I decided that I would rather spend NYE with friends. It just so happens that I know a few Italian Fulbrighters and we all agreed to meet up in Rome.

So I dutifully packed up my things on NYE and took an afternoon flight out to Rome. When I landed I encountered my first surprise: people in Italy eat late. After I landed I managed to send a message to my friends letting them know that I was 1) alive 2) awaiting transport from the airport into the city. It was then that I was told that we would be eating at 9pm. Now I’m the sort of person who normally starts eating any time between 5 to 6 pm. Even 7 pm on an adventurous day, though I make notable exceptions when visiting the Taylor family (love you guys). So to me a 9 pm dinner seemed like madness. Then again I wasn’t actually due to get into the city until around 8 pm so I figured I’d just roll with it.

As for getting into Rome, I had initially planned on taking the train; however, the man at the ticket office convinced me to take a shuttle since he claimed it would be faster. So I paid the extra euro and hopped onto the shuttle with around seven other people.

Now having heard terrible things about the taxis in Rome, my attitude towards cars in Rome was more or less the same as my attitude towards New York City taxis, which is: pay, buckle up, and pray. Turns out my logic wasn’t totally off. After about 15 minutes of driving, we heard a loud bang and a continuous grinding sound. Our driver appeared completely unconcerned with the state of things. My fellow passengers and I were not in the same mind frame. Once it became clear that our driver had no intention of pulling over, one of the other passengers finally pointed out that we had probably blown a tire. I’m not sure if this speculation  just didn’t phase our driver or if he simply didn’t understand what we were trying to say, but he continued to drive until a few more concerned murmurs got him to pull over at a rest stop. To give him credit, we had not blown a tire, and from the quick way our driver hopped back into the car he didn’t see anything that troubled him. But as soon as the car got going the grinding sound continued. Eventually whatever was causing the noise fell off the car, and I suppose it will simply remain an unsolved mystery. Anyways we made it to Termini Station without any more problems and I made it to my hostel safe and sound.

So I got settled in and then headed out to meet friends for our now 9:30 pm dinner. I’m not going to lie I was pretty hungry at this point. Luckily food was forthcoming and I tried Rome’s specialty, carbonara. So it was over pasta and a bottle of wine that I got to catch up with friends, Gargi, Matt, and Naji, and meet new ones, Dan and Iman. With the exception of Matt, all of them are Italian Fulbrighters, so I had fun learning more about what it’s like to be living in different parts of Italy.

I particularly enjoyed talking to Gargi since she has my same ETA job in Sicily. I found out that our students are pretty different and, from I could tell, this largely seems to be a product of the different cultures that we work in. Here are some of the biggest differences that we talked about:

But back to NYE. In classic European style it took us about two hours before we managed to leave our restaurant. So it wasn’t until around 11:3o pm that we finally managed to extricate ourselves and walk towards the Roman Forum. It was here that I learned my second major Italian lesson: in Italy rules are really just suggestions. Both low and high grade fireworks were being set off sporadically, and many them were clearly being set off by amateurs in the middle of the street. There were even a few times that we were concerned for the surrounding trees since they were being peppered by fireworks. Despite the madness around us, we managed to buy a bottle of champagne and get a good fireworks watching position by the Colosseum. This means we managed to ring in the New Year in some sort of style, though unfortunately we did not manage to find glasses for our bottle of champagne. Oh and of course the fireworks went off late. But hey, as one of my new friends succinctly said “It’s Italy…what did you expect?”

From there we wandered to one of Rome’s many piazzas where we bar hopped into the wee hours of the morning. 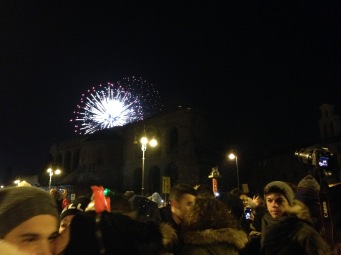 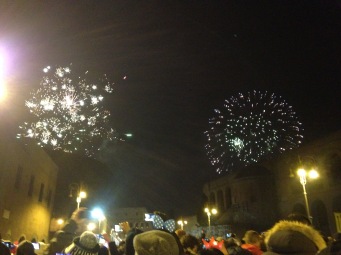