The next day started out with me apartment hopping. I moved from Sara’s apartment to the apartment of two other friends, Lauren and Darshali. Because Lauren happened to have the afternoon off, she decided to join me in my exploration of the Thyssen-Bornemisza Museum, one of Madrid’s main art museums. However, almost as soon as we got there we issued a groan. The line snaked around the block. With plummeting hopes we decided to walk towards the main doors and assess how dire the situation was. To our great surprise, the door was locked. Turns out we had showed up right before opening hours and the line wasn’t hopeless after all. To make things even better, the museum was free that day. So without too much ado we waited for about 10 minutes in line before being ushered inside.

In order to stay relatively crowd free, we decided to work from top to bottom, something that happened to actually make sense chronologically. The museum’s oldest collections are housed at the top of the museum, while its more modern works are shown on the main floor. I will say that one of my favorite moments was running into a few El Greco paintings. I had always found El Greco a bit odd when I studied him in Art History and Spanish class, and while I still find his artwork strange, I left liking quite a few of them. Yay art! Overall, we spent well over two hours at the museum–and we didn’t even get to have a good look in all of the rooms! Unfortunately, our grumbling tummies told us that they would rather eat than spend another hour in the museum, so we set off for lunch. 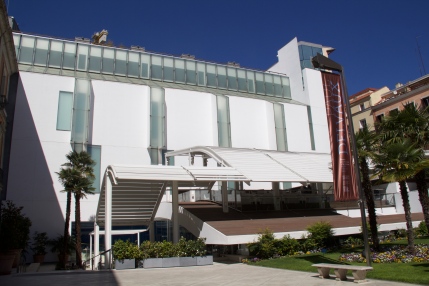 After a nice lunch, Lauren had other obligations, thus leaving me to my own devices. I’ve discovered through my various travels that while I am a huge fan of public transportation (probably a product of growing up with the practically non-existent public transport in Los Angeles), I am an even bigger fan of walking. 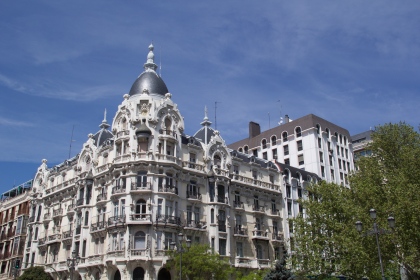 Madrid is a fairly walkable city, so I walked through the Parque del Oeste and caught a glimpse of the Temple of Debod. The temple is an original 2nd century BC Egyptian temple that was given to Spain after Spain helped the Egyptian government in 1960. The construction of the Great Dam of Aswan posed a threat to several nearby historic monuments, and Spain responded to an UNESCO call asking for help to preserve Egypt’s monuments. The Temple of Debod was then given to Spain as a thank you by the Egyptian government. After taking in the temple, I turned around and began to walk back into the heart of the city.

Not too far away from the park is Madrid’s Royal Palace. Unfortunately it was closed when I passed by, but I wasn’t too put out. While I do enjoy visiting palaces, I’ve seen so many this past year that missing this one wasn’t devastating. I did however enjoy taking a quick walk around part of the palace grounds. 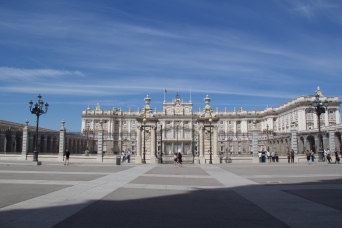 Right next door to the Royal Palace is the Catedral de la Almudena. The cathedral is named after Madrid’s patronness, the Almudena Virgin. According to legend, an image of the Virgin was found by the king on the city wall, thus creating the Almudena (derived from an Arabic word meaning city wall) Virgin.

Similar to palaces, I’ve seen quite a number of cathedrals this past year, and have started to pass them by. What made me want to go into this one was pictures that I’d seen of the ceilings. The multicolored panels were definitely worth a short stop. 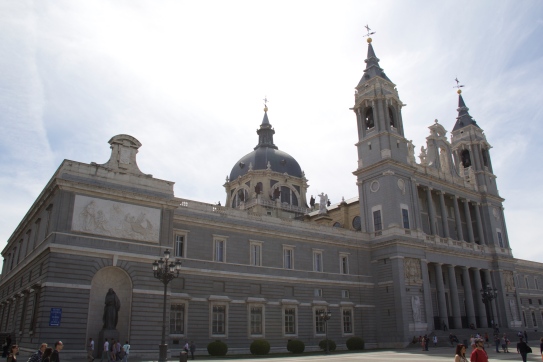 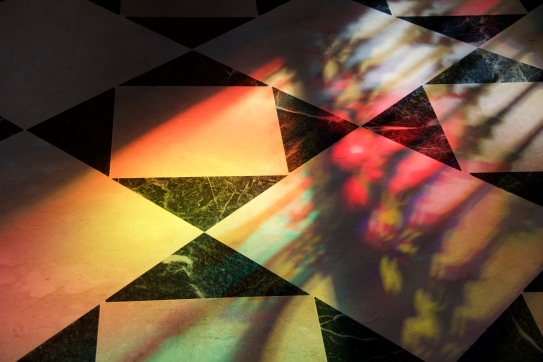 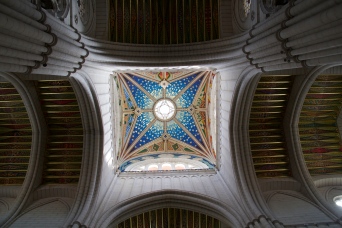 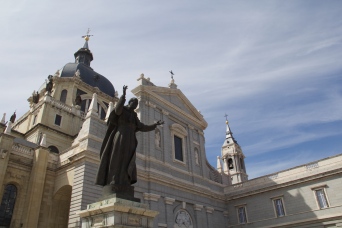 After saying hello to the installation of Pope John Paul II just outside the cathedral, I decided to call it a day and head back to the apartment. From there I reunited with all of my Spanish ETA friends for dinner. After a tasty selection of tapas we went to San Ginés, which is a cafe renowned for its hot chocolate and churros. I must admit that it’s definitely famous for a reason. The melted hot chocolate was fantastic, but it was so rich that my friends told me that it’s rare for anyone to ever finish all of it.

One thought on “Sunshine and Culture”