It seems as though the theme of February is Norwegian travel. The day after I got back from Røros I was yet again off on another trip. For those of you who are wondering, I do in fact really enjoy Trondheim and my travels do not reflect a desire to escape from it. This time my trip was somewhat mandatory. I was off to Oslo for the winter Fulbright seminar and ski retreat.

The seminar itself was on Thursday, but I was able to fly in on Wednesday. Because I arrived in the afternoon, I had some time to walk around the city. Having really loved my visit to Vigeland Park in August, I thought I’d pay it another visit to see if I could catch some snow on the park’s statues.

Unfortunately it was too warm for snow, but not too warm for ice. The park’s paths were incredibly icy, and to make matters worse the ice was melting. Because ice has more or less disappeared in Trondheim, I have stopped wearing ice grips on my shoes and didn’t bring them with me to Oslo. So when I initially saw the icy roads going through Vigeland Park my face fell. Lucky for me, I have managed to develop enough skill when it comes to walking on ice that I managed to avoid falling. 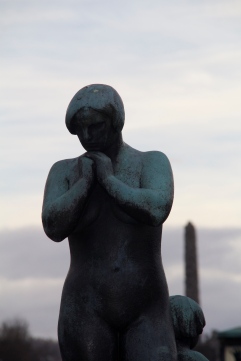 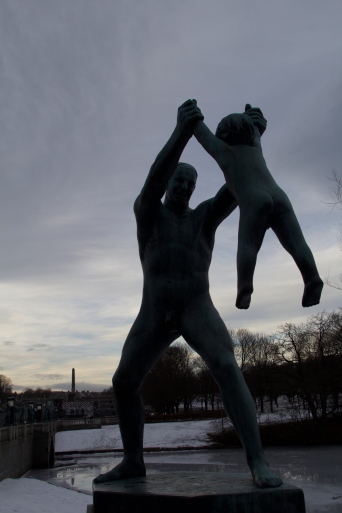 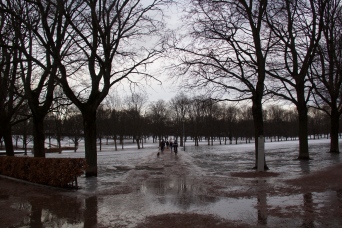 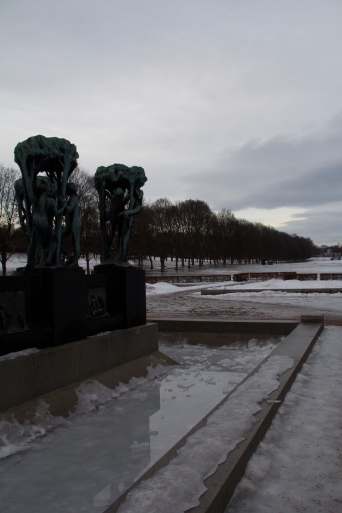 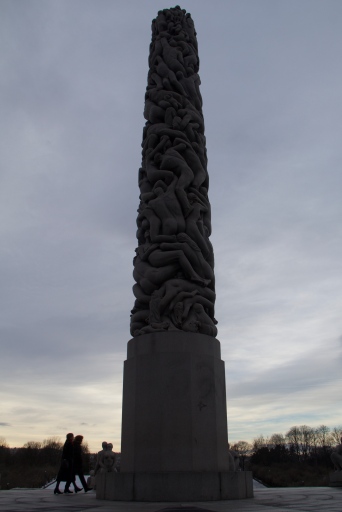 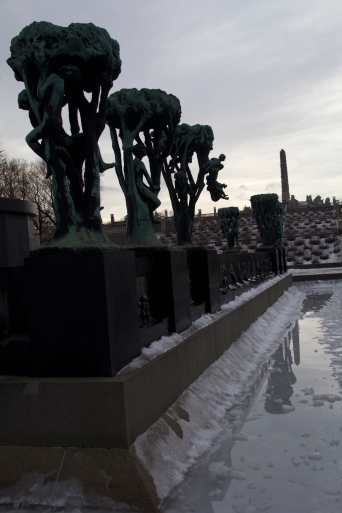 Even though I didn’t get to see any snow on the statues, I still had a great time walking around and seeing the park in winter. Vigeland Park still remains one of my favorite Oslo sights.

From there, I went back to the hotel to meet two other Fulbrighters, Alyssa and Meghan. The three of us set off on the 1 subway line for Frognerseteren. Our goal: sledding. Not just any sledding though, we were going out to Oslo’s most popular run, Korktrekkeren, or the Corkscrew. The run is 2000 meters (1.24 miles) long with an elevation drop of 255 meters (836 feet). The course starts at Frognerseteren and ends at Midtstuen, seven subway stops away (approximately a 13-20 min ride). The course itself is free, but the sleds are not. There are two kinds of sleds, wooden and metal, and Alyssa told us that we should rent the metal ones. Apparently when she and her friends had tried renting the wooden ones many of them were broken or falling apart.

Unfortunately I don’t have any pictures. Because we went late in the evening, my iPhone wasn’t able to do justice to either the course or the magnificent view of the Oslo skyline. Overall, the sledding was incredibly fun and the run took us about 15 minutes from top to bottom, not factoring in the subway ride. A few things to note are:

One thought on “Winter in Oslo”