This past week proved to be incredibly relaxing because school was out. My upper secondary school was off for winter break so I had the entire week to myself. Since I had just gone to Sami Week up in Tromsø, I thought that my next adventure should be a bit closer to home. Luckily Røros is only a 2.5 hour train ride away from me, and it just so happens that their annual winter market, Rørosmartnan, was going on during my winter break.

Rørosmartnan has been taking place since 1644, and it began as a way for hunters to trade their products with the local miners in exchange for supplies. Due to a royal decree issued in 1853, Rørosmartnan is now held for five days starting every penultimate Tuesday of February. It attracts around 75,000 people every year (keep in mind that the population of Norway is just over 5 million so this is quite substantial), and consists of street markets, live entertainment, and cultural programs.*

The first time I went to Røros was in October on a day trip with Alix. Unfortunately, Alix wasn’t able to make this trip down to Røros, but I was accompanied by two other friends, Nicole and Juliana.

Now I generally have a soft spot for the Norwegian train system. Coming from California and its near nonexistent train system, pretty much any functional train system is an upgrade. The trains in Norway are generally pretty good in that they are clean, large, and have wifi. My one quibble with the more regional trains is that they don’t announce stops. This means that I’ve generally been dependent on asking my neighboring Norwegians if I have arrived at my destination (which has been an entirely effective strategy). Luckily, since I had already gone to Røros, I pretty much remembered where the stop was. To make things even better, pretty much everyone on the train was getting off at Røros. While the three of us had decided to make a day trip out of Røros, there were a good number of people on the train who had suitcases and looked as if they intended to stay for several days.

The market itself was excellent. Røros is a fairly small town, but its two main streets, and even a few side streets, were overflowing with people and stalls. Considering that Tromsø’s winter market consisted of only three stalls, I was excited to see how much was on offer in Røros. 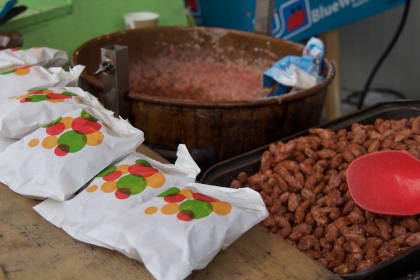 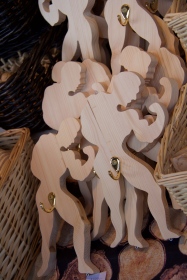 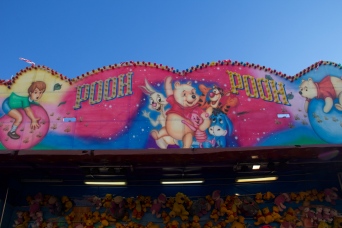 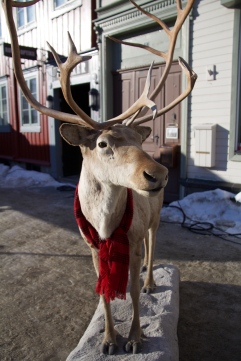 As you can see from the pictures, there was lots variety when it came to the different products for sale. I was also very pleased to see that Elmo and Winnie the Pooh seem to be fairly universal.

There was also quite a bit of diversity in dress, as shown with the huge fur winter coats. Additionally, a number of Sami attend Rørosmartnan, and there were a number of traditional Sami crafts on sale, such as the leather bracelets shown above. I walked away with a number of products, but the thing I was most proud of purchasing was a Norwegian sweater! Being short means that I am occasionally able to buy a children’s size, and I managed to leave with a lovely children’s sweater for just 200 NOK (26 USD). Considering that most nice non-itchy Norwegian sweaters sell for upwards of 1,500 NOK (197 USD), I was really satisfied with my purchase.

After wandering around some of the stalls, Nicole, Juliana, and I walked around the rest of town. Now you may remember from my previous October post that Røros in one of Norway’s coldest towns, and in 2010 temperatures were recorded as going below -44°C (-47.2°F), so I was hardly surprised to see huge mounds of snow, even though most of the snow and ice has disappeared from Trondheim. One thing that we did appreciate about the market was that there were plenty of outdoor and indoor areas where you could sit and have warm food and a hot beverage. 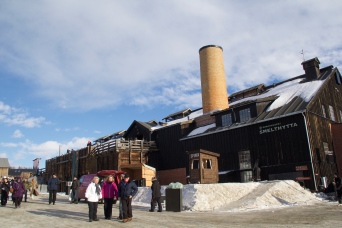 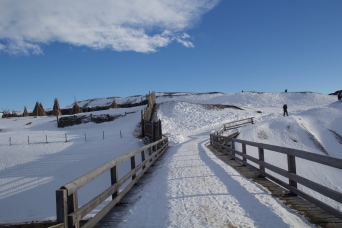 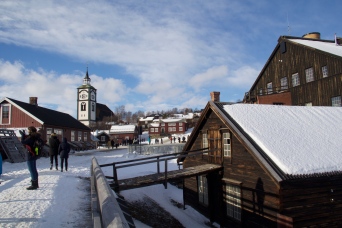 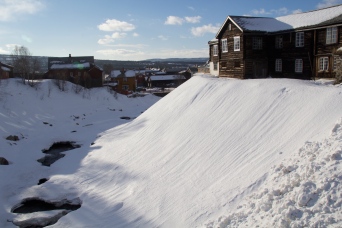 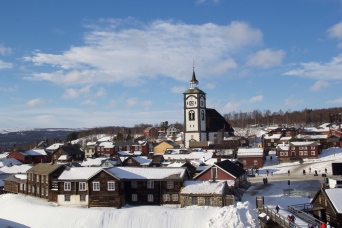 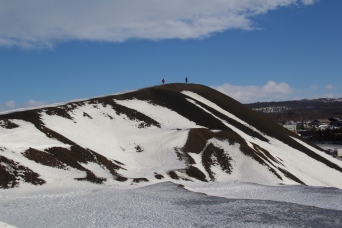 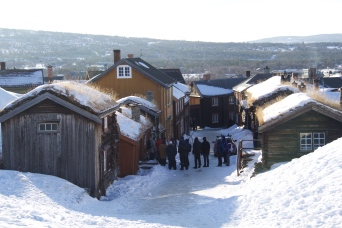 Unfortunately, the slag heaps were really icy so we didn’t get to climb up the bigger ones, but we still managed to get quite a nice view of the city. From there, we went to the local church to catch the beginning of the sunset, and we eventually situated ourselves at one of the local eating joints to have some hot tea and listen to live music before catching the train home.

All in all this was probably one of my favorite trips in Norway. 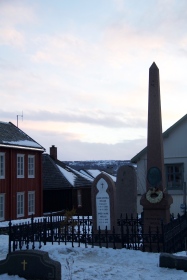 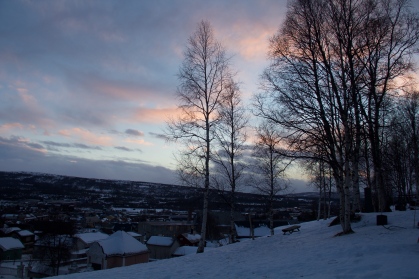 *Since moving to Norway I’ve noticed that I’ve become incredibly averse to crowds. The number of people at Røros probably wouldn’t have bothered me when I just moved to Norway, but having lived here for over six months, I found the number of people at the fair suffocating. To make matters worse, Norwegians are unaccustomed to crowds, which means that they are bad when it comes to things like moving out of the way and (accidentally) hitting people with their elbows, backpacks, purses, shopping purchases, skis, etc.