We finally make it to Vienna at around 2 pm. Because most things were closed by around 5 or 6, we really didn’t have too much time to explore the city on our first day. But, we managed to make it to two major sights that day. Our first stop was Karlskirche, or St. Charles Church. Karlskirche is one of Vienna’s best baroque churches and also happened to be close to our hotel. So, we duly walked the three or so blocks to the church and were almost immediately accosted by a man trying to sell us concert tickets.Vienna is known as the City of Music so this wasn’t much of a surprise. Alix had also warned me that there would be plenty of people trying to sell us tickets.

My Dad and I had contemplated buying concert tickets before our trip, but in the end we decided to just wait and organize something once we were in the city. So, while we were surprised to see someone selling tickets outside of Karlskirche we decided to listen to his sales pitch. He ended up doing quite well and managed to sell us two discounted tickets to a Christmas concert at Schloss Schönbrunn.

After that we entered Karlskirche. Karlskirche was built from 1716 – 1739 in order to give thanks for the city making it through the 1713 plague. Both the exterior and the interior are remarkable, but the best part about the church is being able to take an elevator up to the top of the church where you can view the basilica’s frescos up close. 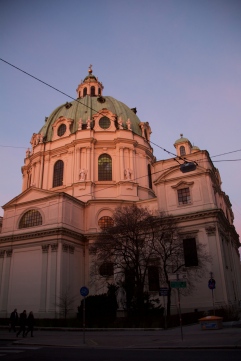 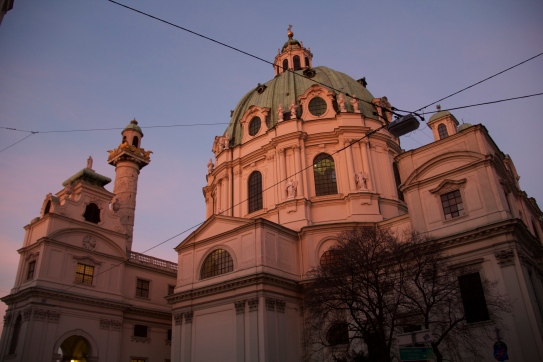 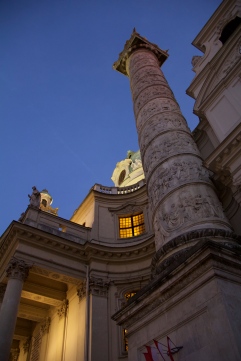 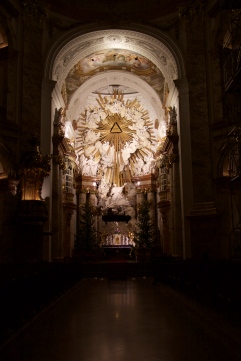 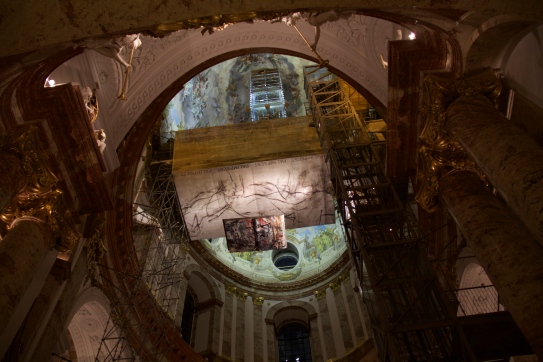 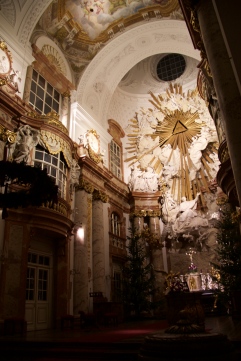 As someone who is somewhat scared of heights, I found the wooden viewing platform above the church a bit too rickety for my taste, but it was still fabulous to have the opportunity to go up and see everything up close. My favorite part was one particularly well known fresco that features an angel burning Martin Luther’s German Bible. It was funny seeing the Catholic Church’s small ways of thumbing their noses at the Protestants. 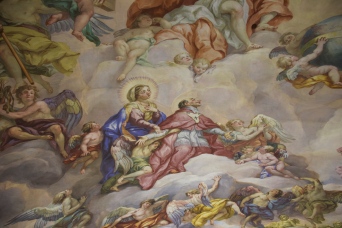 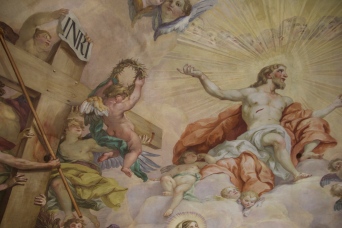 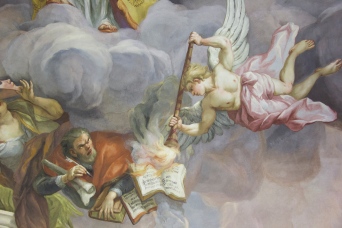 After that we made our way to the Secession Museum. The Secession Museum was built and designed by the Vienna Secession art movement, which included star artists such as Klimt, Josef Hoffman, Kolo Moser, and Joseph M Olbrich. Unfortunately, it seems like the museum is only really well known for displaying Klimt’s Beethoven Frieze, a work inspired by Beethoven’s ninth symphony. Although the museum staff couldn’t have hurried us to the exhibit any faster, once we were there we weren’t allowed to take any pictures (the one below is a replica of a section of the mural), but then again that’s where Google comes in handy. The mural spans three sides of the room and according to the brochure depicts mankind’s search for happiness. The mural can be summarized by saying that it starts with mankind enlisting a knight in shining armor for help. This knight then fights off “Hostile Forces” such as Sickness, Madness, and Death, but eventually succeeds and finds fulfillment in poetry and the arts. The painting concludes with a kissing couple which, again according to the brochure, is based on the lyrics to “Ode to Joy” which contain the line “This kiss to the whole world.” I personally really enjoyed the Beethoven Frieze, although it isn’t placed at eye level which makes it slightly more difficult to view.

Afterwards, we took pity on the rest of the museum (which seems a bit neglected considering how quickly the museum staff ushered us into the room containing the Beethoven Frieze). We saw works from about three or four current artists, but the one that I enjoyed the most was a piece by Renata Lucas which involved a record player. The record player was attached to a revolving door so in order to get the record to play you had to keep spinning the door. 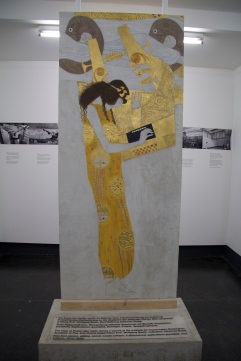 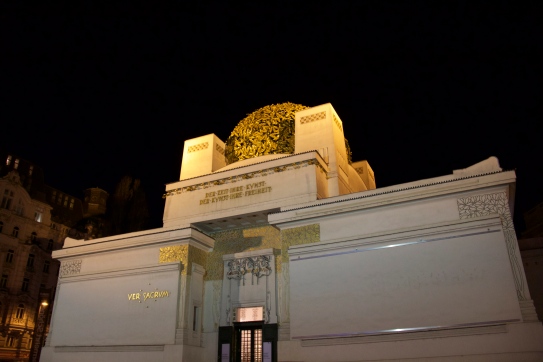 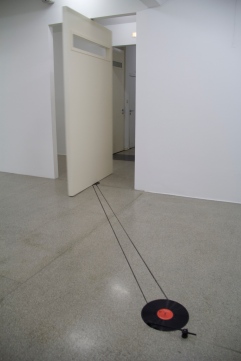 Once we had finished at the Secession Museum we felt like it was time for dinner. I happen to have a friend living in Vienna and she highly recommended trying out a restaurant called Plachutta. So it was with food on our minds that my Dad and I duly set off in search of this restaurant. Lucky for us we were able to get a table and I ordered their most famous dish, tafelspitz. Little did I know what I was getting into. My dish included a type of vegetable soup, boiled beef, beef marrow (which was supposed to be spread on bread), creamed pumpkin, potatoes, horseradish applesauce, and a chive sauce. It was a meal big enough for two and it was superb. I have to say that Plachutta absolutely ruined any other tafelspitz that I had for the rest of the trip. It really was just that good. 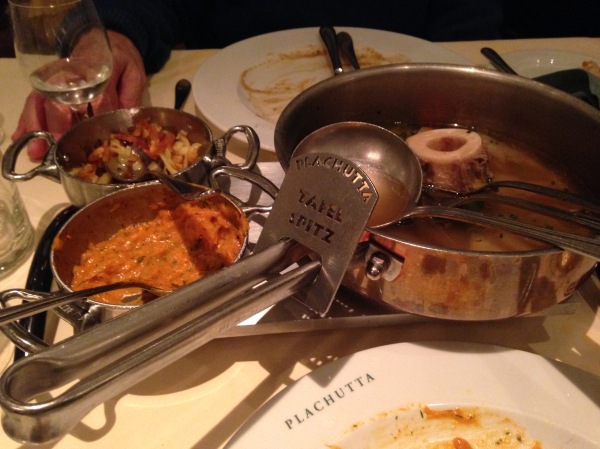 So, it was with very full stomachs that my Dad and I concluded our first day in Vienna. We did pay a quick stop to Naschmarkt food market just to look around, but after that we called it a night.

2 thoughts on “Vienna At Last”