Again, I’m really not very creative with titles, but, in case you can’t tell, I was on a train! After a drawn out series of family debates, my Dad and I decided to spend part of our Christmas holidays in Vienna and Salzburg. To get there we decided to go by train. Now, you’re probably wondering how long that takes. The answer: four trains, four cities, and about 26 hours. We went from London St. Pancras to Vienna via Brussels, Cologne, and Prague. Yes, it took awhile. Yes, this travel plan was part of our family debates. But hey, we made it.

Our first stop was in Brussels. Unfortunately, it was only for about an hour so we didn’t bother to leave the station. But, this did mean that we had a chance to wander around and explore the station. The one thing that really intrigued me was the special charging stations that they had. Instead having standard outlets, they had outlets that were connected to bikes. In other words, if you wanted to power your electronics you had to be prepared to hop on a bike and power them yourself. I had used my laptop for a bit on Eurostar (I’m sad to report that they did not have wifi) and decided to try testing out this bike system in order to charge my laptop for a bit. The system definitely worked, although I don’t believe it charged my laptop as quickly as a regular outlet would. But, it was a fun experiment. I was also thoroughly impressed by the middle aged woman next to me who managed to pedal her bike, charge her phone, and talk on the phone all at the same time. Granted, she wasn’t able to sustain this for too long.

Now I had heard two very different things about the city. One friend living in Germany told me that Cologne was supposed to be nice, while my German cousin told me “I can’t stand Cologne, although the Rhine bridge and the cathedral are nice.” So my Dad and I arrived in Cologne without a clear idea of what to expect. We had about three hours to kill and it just so happens that the Cologne Cathedral, one of the two things that my cousin likes, is right next to the train station. Unfortunately we arrived around 7:15 pm and couldn’t go inside, but we contented ourselves with walking around the cathedral and taking a few pictures. 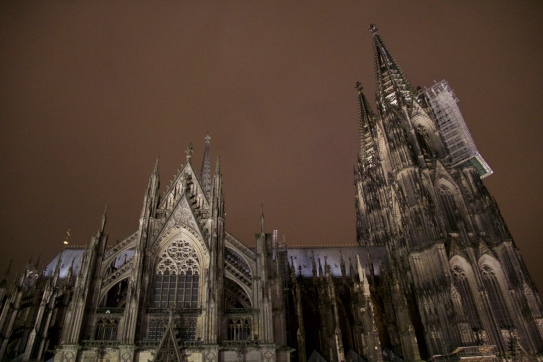 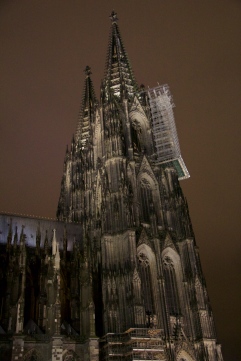 But, not all was lost. We were very lucky because Cologne’s Christmas market is right next to the cathedral. So, once we had finished taking pictures of the cathedral we spent our free time wandering around the market. In retrospect I think it’s probably the best Christmas market that we went to. 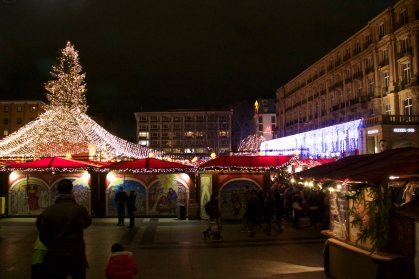 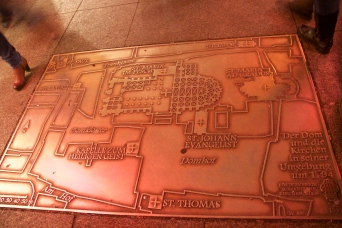 They sold just about everything. They had Russian dolls (as you can see in the picture), Christmas baubles, food, Christmas drinks, and more. The market was pretty large so we managed to spend a good two hours or so there just snacking and looking around. The Christmas market closed at 9pm so after that my Dad and I made our way back to the train station to wait for our night train to Prague. 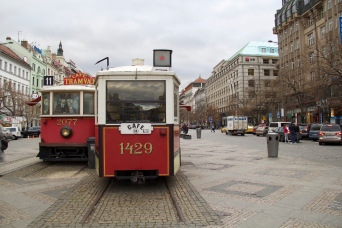 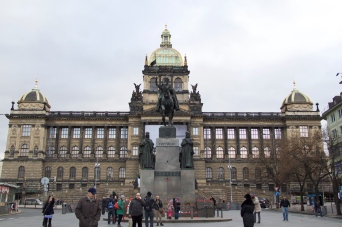 The night train wasn’t anything special and we managed to get to Prague without a hitch early the next day. We had about an hour before our final train to Vienna and so we went for a quick walk around Wenceslas Square (above). It was here that in a happy twist of fate I happened to catch up with my Brazilian roommate, Nicole, and her boyfriend. I knew that she was spending Christmas break in Prague but didn’t bother to tell her that I would be there since I was only there for an hour. I figured the chances of us meeting were pretty remote. Guess I was wrong!

After we boarded our train to Vienna it was all a matter of just sitting back, relaxing, and enjoying the final stage of our journey. We spent the majority of our trip going through the Czech Republic (for a better idea of our trip I pinned all of the major stops we made on the Map page) and I managed to snap a few pictures before we crossed into Austria. 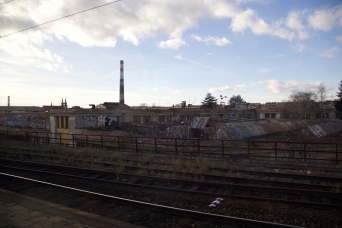 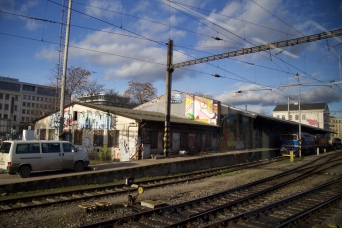